Bent on achieving yet another milestone for their respective local government units, participants converge in a 2-day Seminar Write-Shop on the Formulation of the Davao del Norte Provincial Investment Roadmap for CY 2021-2025 at the Davao del Norte Pavilion last April 26-27, 2021.

The activity is aimed at developing a directional plan and agenda that would serve as guideline for the local government units in their efforts to lure more investors through the promotion of trade and investment, leading to increased local revenues. The resulting blueprint is desired to be achieved in a projection of another 5 years.

Facilitating the two-day technical seminar is Ms. Gelyn S. Llana, Senior Trade and Industry Development Specialist from the Department of Trade and Industry XI. A graduate of Bachelor of Arts in Economics, Ms. Llana has been instrumental in drafting the Island Garden City of Samal and Panabo City’s Three-Year Investment Priorities Plan, as well as Davao del Norte’s Local Investment and Incentives Code. She is also responsible in realizing the Panabo City and Davao del Norte’s MSME Development Plan.

Meanwhile, Ms. Maria Hazel C. Zafra, EnP, Assistant Provincial Administrator for Operations, representing Davao del Norte Gov. Edwin I. Jubahib, extends the appreciation of the Provincial Governor to all the partner-LGUs who have shared their tireless effort and unwavering support to the activities and programs of the provincial government. She added, the collective efforts of all the local government units comprising Davao del Norte is one main factor in the past and present success of the province in creating a more conducive business climate and a more transparent and efficient delivery of public services.

The province of Davao del Norte has been awarded as Finalist for two (2) consecutive years, 2017 and 2018, as the Most Business-Friendly LGU in the Provincial Level, in the entire Philippines. In 2020, once again, Davao del Norte was included in the Top 10 Most Business-Friendly LGU for 2019. It also grabbed the 1st Place Overall Most Competitive Province in Davao Region for two (2) consecutive years, in 2017 and in 2018, and was given the award for the third time in 2020. The Province of Davao del Norte also garnered the 3rd Place as the Most Competitive Province in the entire country during the 6th Regional Competitiveness Summit awards in Manila in 2018.

Just recently, Davao del Norte ranked 2nd in the 2020 Overall Most Competitive Province in the entire country. The award was based on the 2022 Cities and Municipalities Competitiveness Index (CMCI) conducted by the Department of Trade and Industry, summing all the scores in Economic Dynamism, Government Efficiency, Infrastructure, and Resiliency.

The two-day Seminar Write-Shop, which was attended by Local Economic and Investment Promotion Officers and Planning Officers of the different cities and municipalities, was made possible by PADO-Davao del Norte Investment and Promotion Center, in cooperation with the Provincial Planning and Development Office. 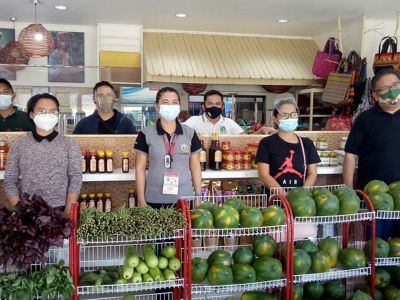